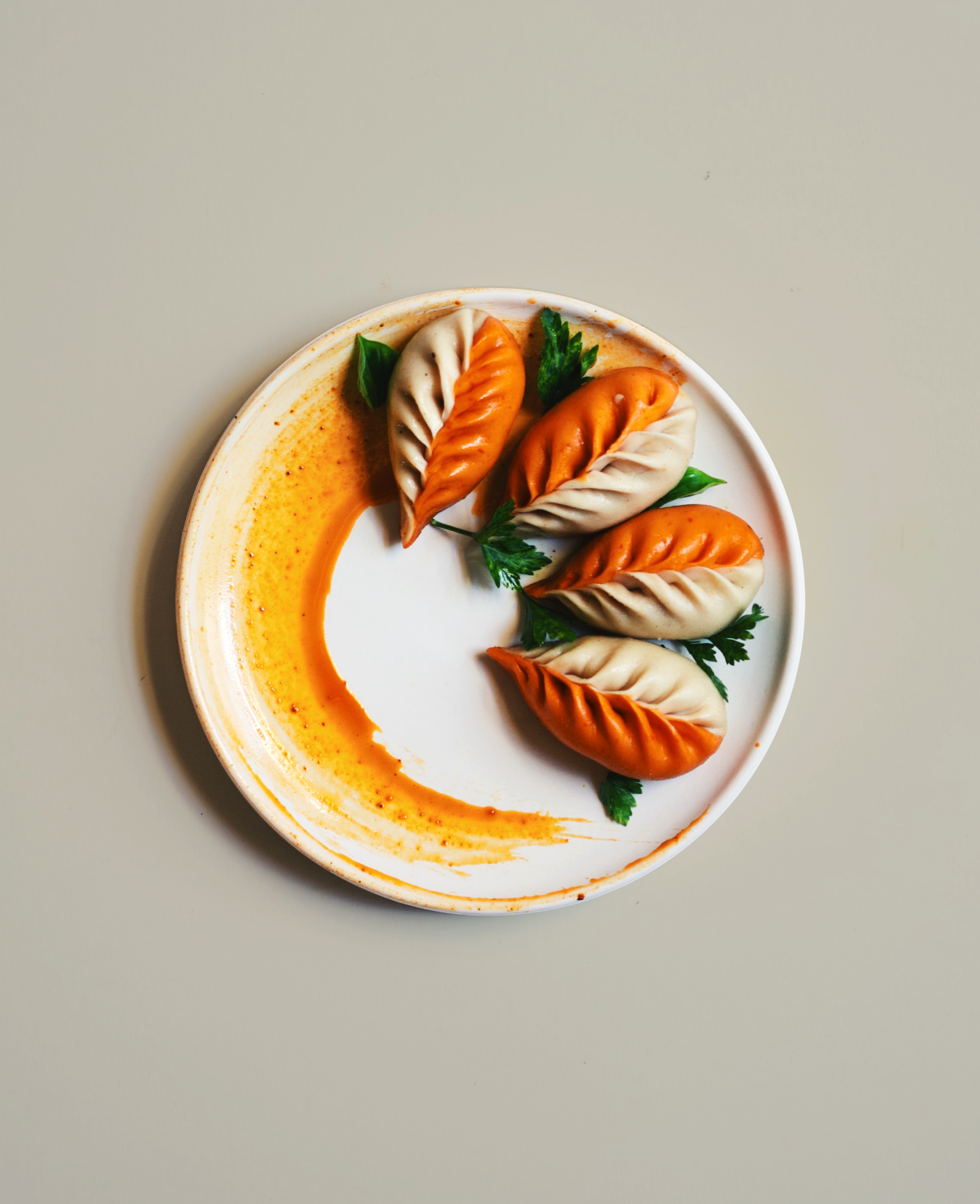 Very excited to partner with Fly by Jing to create this inaugural dumpling that was created to highlight all the flavors and depth of savory and numbingly spicy Sichuan Chili Crisp. With it being winter, I felt like chili crisp and sweet potato would go hand in hand together to create a warm, comforting dumpling with a little kick. It's paired with fresh ground pork to complement the sweet potato along with some classic fresh aromatics like ginger, garlic and scallion. You can go full out like I did with this dumpling or feel free to just use the filling recipe with store bought wrappers.

(if you don't want to do two colors, just double this recipe.)

Roughly chop the bell peppers and place into a pot with olive oil on medium heat. Cook until soft, about 10 minutes, stirring every so often and making sure not to burn.

When bell peppers are soft, move to a blender and blend until smooth. Return the mixture to pot on medium heat. Stir mixture often as it starts to thicken. You'll know it's done when it has become a dark red, thick paste. Set aside when done until ready to use.

For white dough, pour flour and water into a mixing bowl. Using a silicon spatula or chopsticks, incorporate the flour and water until it's loosely combined. Then, use hands to incorporate the rest of the flour and begin kneading the dough (it'll be messy to begin with) until it becomes smooth and the surface is uniform, around 10 minutes. When you press into the dough and it bounces back a little, you know it's done. When ready, wrap dough baby in plastic wrap and let it proof for 20-30 min.

Preheat oven to 400°F. Stab holes around the sweet potatoes to create vents, then place directly on racks and cook for 45 minutes until soft and cooked through. When they've cooled, cut in half and scoop out the potatoes with a spoon into a large mixing bowl.*

*Discard potato skins, or save them and fry them for a side dish!

Add the rest of the filling ingredients into the mixing bowl with the potatoes and stir until all the ingredients are well mixed.

Lightly dust a work surface with flour. When your dough is ready, roll into four cylinders with the thickness of hot dogs, then cut into 1 inch pieces.

Turn each piece cut side up and with the palm of your hand, press down onto it to flatten to make a roughly flattened circle. Dust each side with flour and then with a rolling pin, flatten to create a circular wrapper to desired thickness. Repeat with the rest of your marshmallow dough pieces until you have a bunch of wrappers. Make sure to flour each wrapper as you roll them out, so they don’t stick to each other and cover with plastic wrap, so they don't dry out.

*If doing solid color you can skip this step.

To fill, place a small golf ball sized amount of pork filling into the wrapper (it's okay if it seems like a lot). Create a taco shape with the wrapper and push one of the ends a 1/2 inch into the meat to make a “w”. Squeeze the to folds together and push into the meat again. This time, take the right half of the “w” and pinch, push into the filling, then take the left half of the “w” and pinch, squeeze into the filling again. Repeat this process (the excess meat will squeeze itself out) until you've enclosed the meat. Pinch the tail end of the braid and shape the dumpling to resemble a tear drop.

Add a generous dab of oil and place dumplings bottoms down and fry on medium heat for 1-2 minutes. Add 1/2 cup to 1 cup of water (it should hit about 1/3 of the dumpling) and place a lid on top and steam for 6 minutes on medium high heat. Once the water has evaporated, fetch the dumplings out of the plan, then serve with some extra Fly by Jing Chili Crisp oil and fresh herbs, serve.

More in Dumplings and Bao

(if you don't want to do two colors, just double this recipe.)