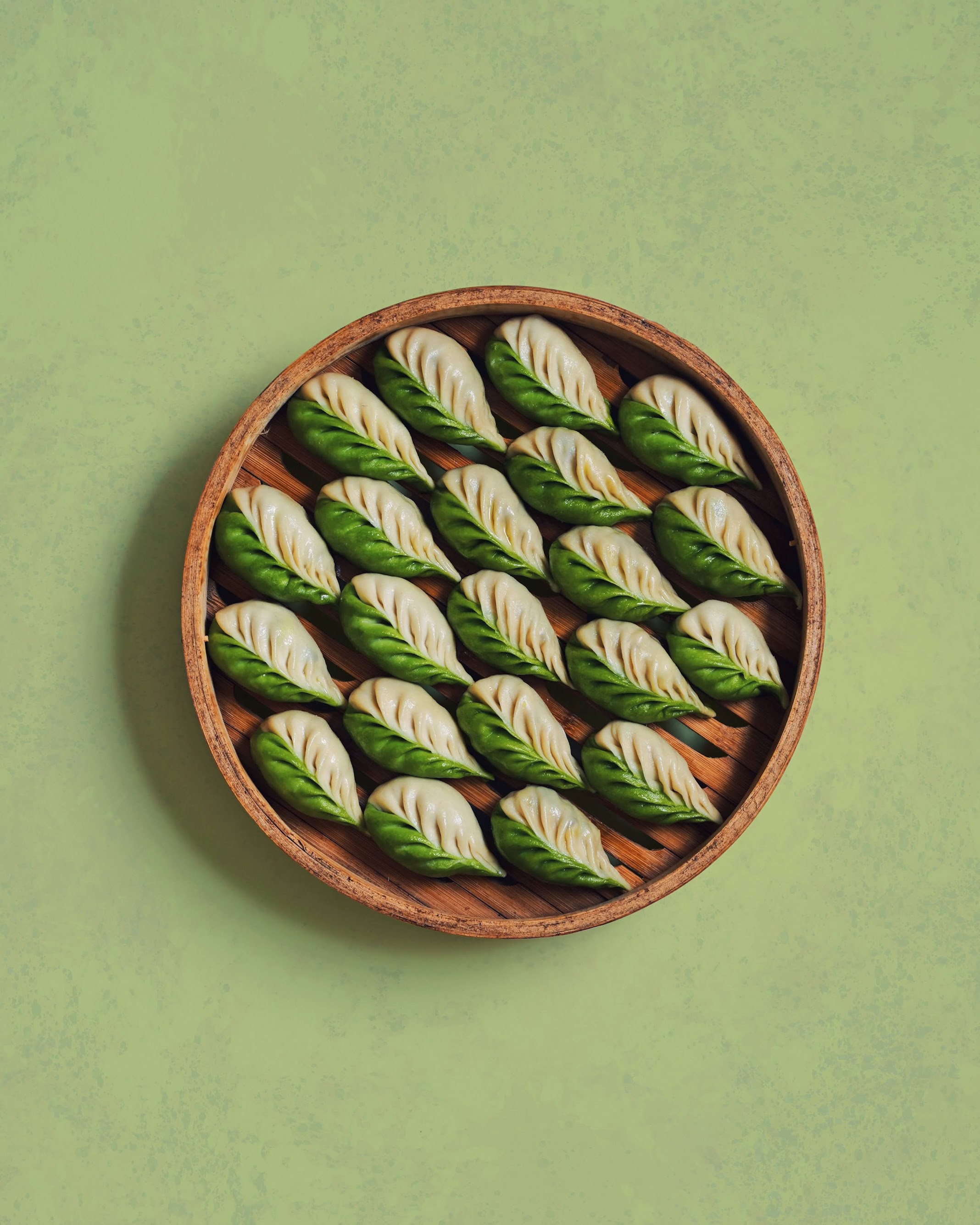 A vegetable forward dumpling featuring bok choy, shiitake mushrooms, and roasted golden beets that's then paired with ground pork. I love choosing a variety of vegetables in a dumpling to add complexity. Whether its an added quality of freshness and texture from the bok choy or the subtle comfort of caramelized sweetness from the roasted golden beet, when combined together and wrapped in a carb package these ingredients really shine. I've used a two-toned braided fold but any fold using store bought or homemade wrappers works great with this recipe too.

💡: If you want to do green wrappers like the photo above, replace water with spinach juice (spinach and water blended then strained).

Set a large pot of water to boil. Trim the bottom ends off of the bok choy and discard, then place the bok choy into boiling water until its cooked through and semi-soft, about 2-3 minutes. Carefully remove from boiling water and rinse under cold water to stop it from cooking, then strain. Take your bok choy and dice into small pieces. Its still gonna have quite a bit of water so once you’re finished chopping, place all your bok choy into a thin cloth (or layer paper towels together) and squeeze all the excess water out. Place into a bowl and set aside.

Preheat an oven to 400°F. To prepare the beets, peel the skin, then slice them with a knife or mandolin to the thickness of potato chips. Placed sliced beets on a sheet pan covered in parchment paper. Coat with olive oil and give it a toss, then distribute the slices evenly on the sheet pan.

On another sheet pan covered with parchment paper, generously oil shiitake mushrooms and evenly distribute on the pan. Place both sheet pans into the oven and cook for 20-25 minutes until cooked through with slightly crisped edges. Sprinkle a little kosher salt on each pan to season once cooked. Finely chop the beets and mushrooms and set aside.

Add the beets, mushrooms, and bok choy into a large mixing bowl along with the remaining filling ingredients. Mix filling by using a circular motion with your fingers until the filling looks homogeneous and sticky, about 2 minutes. When mixture is done, cover with plastic wrap and set aside in the fridge until the dough is proofed and ready.

After dough has rested, make dumpling wrappers from this recipe here (or use store-bought). When ready to fold, place filling about a third of the size of the wrapper into the center. Seal together with the fold of your choice. Repeat until you’ve run out of filling or wrappers.

If steam-frying — In a nonstick pan, add a generous dab of oil and place dumplings bottoms down and fry on medium-high heat for 1-2 minutes. When the bottoms have browned, add 1/2 cup of water and place a lid on top (the water will splatter when it hits the oil so be careful!) cover and steam for 8 minutes on medium-high heat. If the water evaporates too early, add a tablespoon more of water at a time. Once the water has evaporated, fetch dumplings out of the pan and serve.

More in Dumplings and Bao